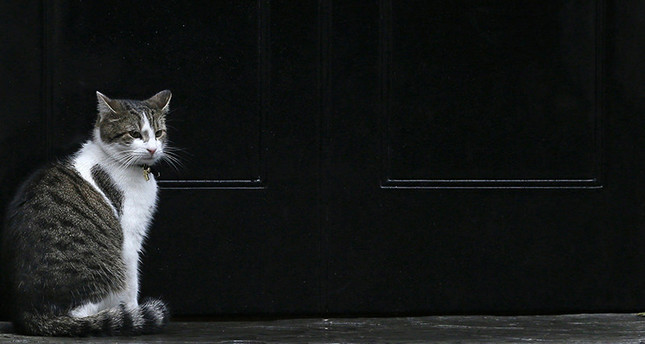 It is not good news seeing Larry and Palmerston in constant battles for the past two weeks, some of which have resulted in Larry being carted off to the vets. According to a recent story by Helena Horton, who writes the The Telegraph, the fights are becoming more serious with photographers spending more time photographing the spats of the felines at number 10 then the MP’s themselves.

So, what is going on?

Territory is the number one priority for cats. Why? Because it is the place they eat, sleep, hunt and feel secure in. Therefore, connected to survival. Human attention also comes into the equation. Humans are a resource of food, care and attention to cats and so equally valuable real estate.

Cats are generally solitary animals but can learn to share space and territory. Most cats choose not to fight with one another because fighting can lead to serious injury. Cats generally work it out amongst themselves with one cat backing away or avoiding the more confident territorial cat. Cats also learn to time share and can do this by scent leaving and smelling. A cat can determine a rough time frame of when a neighbouring cat has frequented the area by smelling the scent left by its paws, body pheromones or urine. When two confident cats are fighting over territory, with neither backing down, this is serious.

Larry and Palmerston are two confident territorial cats! Not a good mix to begin with.

Larry is responding as any cat would with an intruder on his territory. The problem is that Palmerston is equally confident and sees the territory as his. With both cats being mousers the territory is an important survival tool for both. Two weeks of intense fighting is very serious and should NOT be allowed to continue.

Constant fighting will only re-affirm negative associations whenever the two cats meet resulting in a vicious cycle.

Not only can serious injuries occur (One of the main reasons a cat can suffer serious injuries, according to vets in and outside London, is from cat fights with traffic accidents second) but the situation can cause enormous stress in each cat. Stress in cats can have all kinds of consequences such as over-grooming, urinating or defecating inside the home, aggression, illness and long term depression. With Westminster considering adding another cat to this equation, as the article by Helena Horton suggests, this could lead to disastrous consequences and , no doubt, a build up of veterinary bills.

Although Westminster will not comment on human intervention at this stage Battersea Cats and Dogs Home, where Palmerston and Larry were originally from, have offered advice to help calm the situation.

Hears hoping Westminster listens to the calls for change. It will be a first!