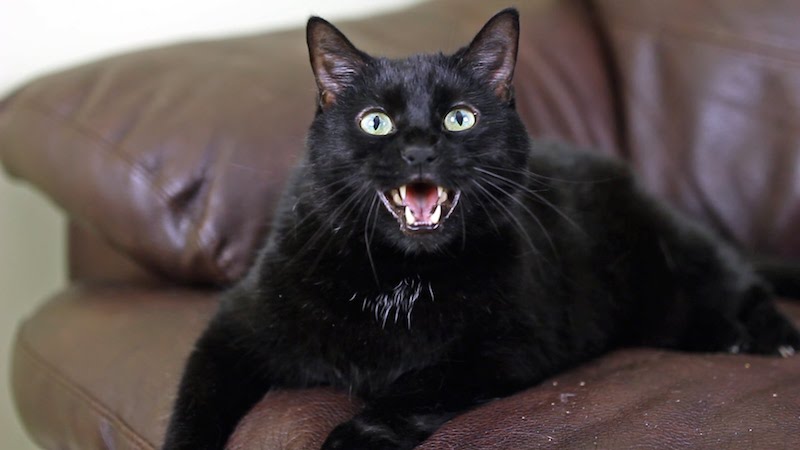 As if being at our cat’s beck and call isn’t enough, scientists are now working on a prototype invention to enable our cats meows to be turned into human speech.

The news was broken via SCOOP.

According to the news report:

A new tech innovation based on a unique mathematical algorithm is set to offer Kiwi cat owners the chance to ‘speak’ with their feline companions.

The prototype device which fits on the collar of a cat, was developed after extensive research into feline behaviour. The device identifies a cat’s miaow with a digital sensor and uses a unique programme to turn it into a human voice.

The newly developed Catterbox device houses a microphone, speaker, Bluetooth technology and WiFi allowing cats’ miaows to be recorded, processed and then played as human speech.

The collar will output sound, while a smartphone app will analyse the sound against an extensive database of cat miaows using a custom made algorithm which can distinguish sounds from a wide range of cat ‘accents’.

The device has a preprogrammed selection of phrases that are spoken based on its interpretations of the cat’s voice. The collar listens for a “miaow” sound made by cats, then based on this sound uses a unique custom algorithm to detect if this in fact a miaow, or another sound. If the database gets a match, the device will play a phrase in a human voice chosen by the owner to represent their cats personality.

The device uses digital signal processing technology similar to that found in the speech recognition software used in the operating system of smartphones.

Researchers used a technique known as Spectral Analysis to process the audio data and characterise the frequency content of the sounds, helping researchers build and interpret a database.

The prototype collar was produced using a high end 3D printer with numerous iterations to ensure an ergonomic design and fit so cats wearing it would be comfortable.

Oliver Downs from pet food brand Temptations, which funded the device, says international studies have shown that cats do not communicate with each other by miaowing, rather it was their chosen way to communicate with humans.

He cites research by anthrozoologist John Bradshaw whose work found that cats and humans had developed a secret language of miaows and concluded that, while many of us thought a miaow was classic cat behaviour, it was simply their way of getting our attention.

“Numerous studies have shown this to be the case and we wanted to take this one step further and enrich the relationship between cats and their owners,” he says.

“A cats main way of communicating between themselves are body languages and “screeches” rather than miaows and purrs, says Downs.

“A purr essentially means that a cat is content and “ok with it’s current situation”. A cat can, and will, purr when it’s being petted, when giving birth and even when dying. It’s a state of relaxation.

A miaow on the other hand is something a cat uses almost exclusively to talk and mimic humans ¬very much like a parrot does, in a sense. The only other situation where a cat will miaow is with it’s kittens,” says Downs.

“We believe this new technology will offer a new way for cats and their owners to interact on a daily basis and enrich their relationship,” he says.

Downs says the device will be demonstrated in New Zealand and the USA this month as part of the company’s test marketing programme.

Vocal demands in a language we can understand!! Oh dear!

I guess our lives are over!

Help is just an email away. Consultations are vet referral only.