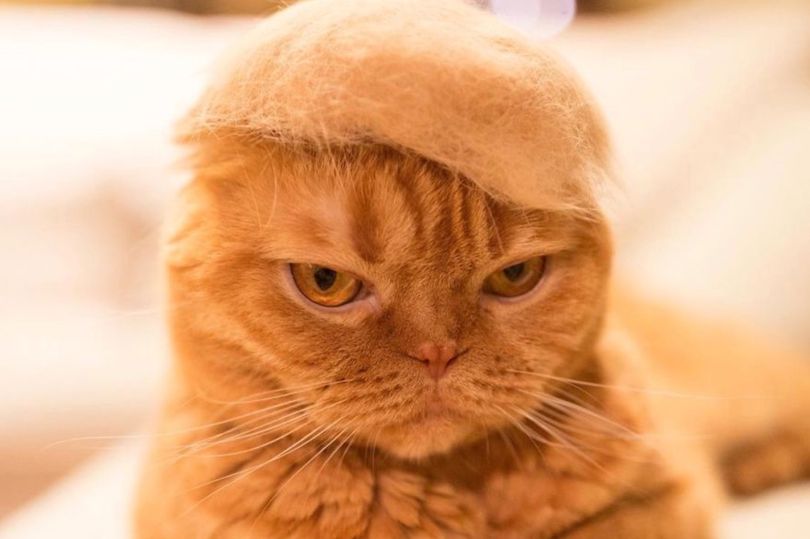 A Japanese photographer has become an internet sensation by crafting hats for his three cats out of their own fur – even transforming one of them into Donald Trump.

Ryo Yamazaki collects the fur after brushing his fluffy Scottish Fold pets – known for their distinctive folded ears – and has earned more than 48,000 followers on Insagram through his unusual feline fashion design.

His beloved moggies Nya, an eight-year-old grey tabby, Maru, a six-year-old white cat and Mugi, a one-year-old ginger puss, have also won plenty of admirers after Ryo posted snaps of them sporting the hats.

But poor Mugi seemed less than impressed when pictured days after the US election with a fur comb-over akin to President-elect’s infamous barnet.

Ryo, referencing one of Trump’s most controversial campaign pledges, captioned the snap: “Nobody makes use of boxes better than me… I will build a great wall of boxes in my room, and I will make my owner pay for that wall.”

But most of the photographer’s pics are of a less political persuasion.

His three cats can be seen modelling amusing cones constructed of fur and hats with pointed ears.

Another said: “Omigod! They’re brilliant. Love the wee skull caps on cats trying to be nonchalent.”

Emily Harris wrote: “The hats are cool – but even more impressive is getting three cats to wear hats and stay still for a picture!”

Others were more cynical, sniping: “Somebody has time on his hands, huh?”

But with thousands of adoring fans on Instagram, Ryo and his cats have proved a hit.

So, while many people criticise the fur industry for cruelty to animals, we think this is one fashion trend to be applauded.