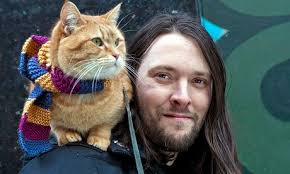 A ginger tom called Bob was feline like the cat’s pyjamas when Kate Middleton stopped to pet him at the premiere of a movie about his life.

A Street Cat Named Bob is the true story of a stray who befriended homeless drug addict James Bowen on the streets of London and helped turn his life around.

But Bob is not the only moggy with a rags to riches story.

Here, we reveal some other celeb kitties who have made a killing.

The sour puss was a regular snowshoe Siamese until a photo of her posted online in 2012 went viral and the Grumpy Cat sensation began.

Grumpy, who lives in Arizona with owner Tabatha Bundesen, now has her own book range, movie, YouTube channel, Madame Tussauds dummy and manager.

The cat is worth a cool £64million, travels first class and stays at the best hotels. So there we are – it doesn’t always pay to be purrrr-fect.

Perhaps Instagram’s most famous cat, the blue-eyed tabby Nala has three million followers and her own clothing range.

She spends her days playing with toys, snoozing with her best pal Luna Rose and posing for campaign shots with Friskies cat food products as part of a six-figure deal.

At just four months old, Nala landed in an animal shelter as her first owner could not afford to care for her. LA-based cat-lover Varisiri Mathachittiphan rescued her and began photographing her every move for friends and family to see on Instagram. The number of followers snowballed.

Varisiri said: “I had no idea that it would come this far. I’m not sure if it’s because she’s cute, or because of her background, but I like to believe that Nala is an underdog.”

When the much-loved British comedy actress died in 1996, aged 76, she left her £1million home to her cats, which were all strays that she had rescued.

Hamish, Coco, Boon, Tuffnel and Eileen continued to life in luxury at Honeypot Cottage, in Berkshire.

Beryl’s love of cats blossomed after her marriage to Derek Franklin ended in 1966.

Tara became a hero in 2014 when she fought off a dog as it attacked her autistic owner Jeremy Triantafilo, four, as he rode his bike outside the family’s California home.

The dog had escaped from next door and when it started biting Jeremy’s leg, Tara launched herself at the animal and chased it away.

Jeremy’s dad Roger Triantafilo said: “It’s pretty amazing. That dog did not even know what hit him.”

The incident was caught on CCTV and has been viewed more than 26 million times on YouTube. Fans can buy Tara cat T-shirts and she has received an LA animal hero award.

Richest in the world

Tammaso, a stray, was found in the streets of Rome by Maria Assunta, the childless widow of a tycoon.

The cat’s trustee is a nurse, known only as Stefania, who Maria befriended in a park. Stefania said: “I promised her that I would look after the cat. I never imagined that she had this sort of wealth.”

When the Perceval family were trying to sell their Melbourne mansion, the buyers offered them an extra £76,000 to throw in their adopted moggy, Tiffany.

A child of one of the bidders had fallen in love with the cat when they were viewing the house.

Owner Fran Perceval said: “People would come through, and she’d observe them and be patted.”

The family agreed, and parted with the £1.1million house and cat.

When New York couple Sara Nozaki and Grant Olson rescued a stray, grey tabby from a friend’s garden, it was only when they got him home that they realised he had a silly squat, with his furry hind legs tucked in front of him.

They posted a picture of Wilbur online, which was quickly shared and garnered hundreds of likes. Now he’s got his own Instagram account, with ­thousands of followers, and gets sent gifts from all over the world.

It pays to stand out.

Last but not least in the street cat Bob and other famous cats post – At the age of 39, Canadian composer Phillip Schreibman was plunged into depression when both his parents died.

But when he found an abandoned kitten, he rescued her – and she, in return, nursed him back to life.

He wrote a book about the experience, My Cat Saved My Life, and said: “It’s about a man and a cat and what the cat showed the man before it was too late. I was that man. I had a friend, a cat, named Alice. And she pulled me out of despair.”