the plight of the black cat 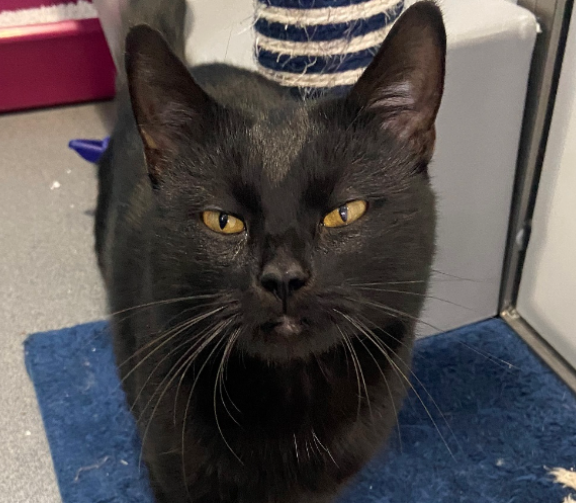 In the wonderful, often quirky, parallel universe of the cat lover, where cats rule the roost, there’s one cat that seems to have innocently caught itself up in all manner of myths and superstitions and who I personally think has and still is drawing the short fish flavoured straw… Welcome to the plight of the black cat *

I never really thought much about the plight of the black cat until, time and time again, I see a high percentage of black cats up for adoption in rescue centres around the UK.  Also, on a visit a while back to The Mayhew Animal Rescue I was confronted by pairs of large beautiful eyes glowing from thick solid inky coloured coats as I walked from cabin to cabin.

As I entered the cattery each moggie vocalised louder and louder, competing against one another, as if saying ‘No, over here. pick me”. Ok, so I am anthropomorphizing a little here but what is going on with the black cat and are they being overlooked for more brighter colourations such as the ginger or white moggie?

Lindsey Quinlan, the head of the cattery at Battersea Dog and Cats home, believes that rescue centres may have more black cats awaiting homes due to them being the most common, but it seems to be a fact that black cats do spend more time, than other cats, awaiting their forever home and this has been stated time and time again in many rescue centres here and overseas.

On one visit to The Mayhew I met Joanna Puzzo, cat welfare co-ordinator. As if she hadn’t got enough on her plate, she kindly agreed to do a head count of all the black cats currently awaiting homes.

Out of the 37 adult cats 13 (thank god she didn’t count them on a Friday) were black (35%) with 7 black kitten out of 13 (53%). I couldn’t help noticing that some of the cats had been at The Mayhew for some time. I asked Joanna what she felt about the high percentage of black cats on the block

“Generally black cats are overlooked in favour of tabbies and gingers. Some of the reasons given for not wanting black cats are that they’re scary, bring bad luck or you can’t see them at night except for their glowing eyes. People will see a lovely black and white, or black cat with the best temperament, and then go for a somewhat aloof ginger or tabby because of the way they look”

The black cat, having carried the weight of hundreds of years of folk-law,

is now facing another set back with the modern day phenomena of the selfie. According to a recent report by Lorraine Fisher (Daily Mail) the RSPCA has blamed our self-obsessed culture with thinking the black cat is too dull to take photos of.

I am not well read up on the in-depth history of the black cat so thought I would ignore my 2 silver and white cats (I feel guilty they are not black now!) one whose eyes are trying to attract my attention by peeking above my computer, to try and understand the journey the stunningly majestic black cat has made after its domestication by man and where she stands now in people’s hearts around the world.

Storytelling changes from place to place and characters tainted with the brush of bad luck and evil conations may well be revered in other cultures. For instance during the middle ages the black cat, in western society, made people run in terror. Anyone caught with a black cat would be deemed a witch with the cat supposedly playing a role as part demon, part sorcery.

Roger Tabor, in his book, The Rise Of the Cat, believes people vilified cats as demons due to the misunderstanding of their biology. Glowing eyes in the dark didn’t help matters! And yet the Egyptians, with the idolization of the goddess Bast, who was depicted as black, held these cats in high favour and attributed good luck to them. As if the black cat wasn’t confused enough in comes the superstitions of the pirates.

The Scottish, being the lovely people that they are, gave our black moggie a break.

They decided that an unfamiliar cat of black colouration suddenly appearing at the front door would give them good luck. Eastern countries also took our charcoal buddies under their wings deeming them special and carrying the luck of the gods. Some countries citizens believe if a black cat crosses one’s path it will bring bad luck whilst others think good luck will befall them. It is fascinating to read about all the different attributes humans have put on the shoulders of this simple yet beautiful animal just because of genetics!

He/she can bring luck to the Egyptians, Eastern countries and Scotland, conjure up the devil and turn any of its owners into witches, sink ships depending on what mood its in that particular day (although if you were a sailor, and the cat decided to live on board, it would be the opposite) as well have a definitive hand in your fate depending on whether it had chosen to walk the same street as you or not!

I don’t know what Pippin (below) thinks of all this. He just knows he has to guard the bins on bin collection days! 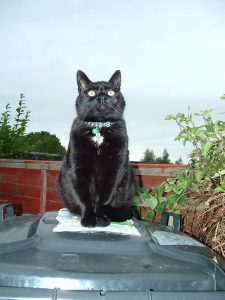 Please get down to your local rescue centre and give a black cat a home. Once you dive into those beautiful glistening eyes, like liquid moons on a dark night, you will never be the same again.

*NOTE: Photo’s of cats within the the plight of the black cat article above have been taken from recent online visits to various rescues. I have stated which rescue beneath the cat with a link if anyone is interested.