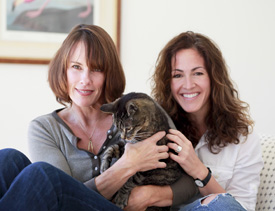 A True Story of Love, Desperation and GPS Technology

A small book caught my eye one day as I was leaving my local library. Already with a handful of books weighing me down I was just about to leave when Lost Cat gained my attention. Any book with the word cat in the title usually has me within seconds but this book drew me further in because of the wonderful little drawing of a cat on the front in all of its simplified glory. I had to know more so back I trudged to the library assistant to laden me with one more book thus reaching my limit of 9 for the day.

From the very first page I could not put this book down. It was funny, sad, loaded with suspense and beautifully illustrated. As a passionate cat lady myself I instantly felt connected to the author and recognised many of my own thoughts and feelings at various stages of the story. Never had I read a book that so precisely captivated the cat to human relationship and how many of us feel about our beloved fur-balls. As a behaviourist, working with cats and humans to sort out unwanted behaviours, the unique relationship we have with our pets is one of the most important aspects I have to consider, properly understand and treat with the utmost respect.

I caught up with Caroline Paul to congratulate her and illustrator, Wendy McNaughton, on the success of Lost Cat and asked if I could conduct an interview. The warmth from her style of writing, in Lost Cat, was quickly extended to me too and she kindly agreed to answer a set of questions I put together. Hope you enjoy!

You can clearly tell that you adore cats from your brilliant book ‘The Lost Cat’. What’s your earliest recollection to the start of this love affair with our furry friends?

We had a whole menagerie of animals from the time I was five – cats, dogs, horses, chickens. But it was a beautiful grey Persian named Venus who was our very first pet. She was affectionate and shy in all the right ways for a young kid who was also affectionate and shy.

Can you sum up your relationship with cats as a whole and perhaps speak about your thoughts on the human to cat relationship the 21st century has at present?

My relationship with cats is simple. I love them. And when they love you back, you know you’ve earned it. Cats still get a strange rap; people complain that they’re aloof, that they don’t bond with humans. But these complaints mostly come from non-cat owners. Cat people know that cats are highly expressive and affectionate and are very capable of bonding. Anyone who has had their belongings peed on after being away on a trip knows that cats are capable of very, very deep feeling.

The illustrations in your book, drawn by Wendy MacNaughton, really complemented the story perfectly.

Lost Cat sounds like a cat book but it is really about human relationships. And Wendy lived through this whole cat-stalking caper, so it was only right that half the book would be made up of illustrations by her that sort of tell her side of the story. The book would be a shell of itself without her drawings, graphs and flowcharts!

Your other two books, East, Wind, Rain and Fighting Fire are very different from Lost Cat. First of all how did you get into writing and secondly did you always know you would eventually write a book about cats?

I became an author when I decided to write about being a San Francisco firefighter. Publishing a book is easier when no one else has tackled that subject, and no one had heard about firefighting from the perspective of a woman. My next book was a novel, based on true events during World War 2. So I guess I was due for a book that didn’t have death and destruction in it. Lost Cat did start out as a ponderous memoir, all about injury and depression after a major accident (I crashed my experimental plane.) After a few rewrites I was sick of myself and my supposed insight into darkness and hopelessness. Much more interesting was how I went off the deep end when my cat Tibby disappeared during this time. So I cut out all the erudite, angsty stuff. Then I asked Wendy to illustrate, and suddenly it was a light, humorous cat book with some serious themes.

Your conclusions on cat grief (without trying to spoil too much) were very interesting. Some people are skeptical regarding cats, or animals in general, displaying or being able to feel grief or upset when a companion animal or human dies. What are your thoughts on this and did your findings really surprise you?

There’s no question in my mind that animals mourn. In Tibby’s case his process was captured on the GPS maps we had of his movements during this time. He went from being a very active cat to not leaving the house. Doesn’t that sound like grief? It sure does to me.

What would you say to a cat owner who feels their cat is grieving? Any advice to help both through the process?

Keep everything else very consistent in your animal’s life. Give your animal lots of love. And grieve openly yourself. Cats get it.

I found it interesting that you allowed your cats to free roam when many in the US do not advocate letting cats outside. Even Jackson Galaxy, your famous cat behaviourist, advocates keeping them indoors. What are your thoughts on the great in-door or outdoor debate?

The debate centers on the dangers of the outdoors. But if the area around your home is relatively free of dangers like cars and wild animals, like mine is, then I feel strongly that animals should be let out, as they’re so much happier. You weigh the dangers with their happiness. It’s not an open and shut case.

The indoor cat advocates also say cats have ravaged the songbird population. My understanding is that this is mostly feral cats. Also the numbers in that study are in question. Look, I hate seeing any animal killed. For that reason I believe that it is humans who should be kept inside. We are more of a menace to the environment and ourselves than any cats. Indoor only Humans! That’ll be my mantra from now on.

Will you be writing any more books on cats?

My next book is for young girls and it’s called The Gutsy Girl, Escapades for Your Life of Epic Adventure (also illustrated by Wendy and coming out March 1, 2016.) There is a tiny kitten in the very last adventure story but that’s it. I’m not saying I won’t write another cat book. Trust me, there’s a very good chance that I’ll go off the deep end again and an interesting cat story will come out of it.

Any advice for owners of cats whose cat has disappeared for a while?

Don’t give up hope. Keep calling them at night, keep checking shelters, keep talking to neighbors about possible sightings. Studies have shown that a frightened cat will hide for up to ten days. After that their neural system begins to calm down and they get hungry and thirsty and head for home. And I’ve heard of cats gone for months, even years, who one day just saunter back in through the open window.

if you haven’t already read this magical book I suggest you buy it right now. Readers in the UK can easily purchase Lost Cat on Amazon UK or for the US: Lost Cat on Amazon.com . You can also purchase directly from the Publishers: Bloomsbury Publishing

To read more about the illustrations of Wendy McNaughton please visit her web page on: http://wendymacnaughton.com/